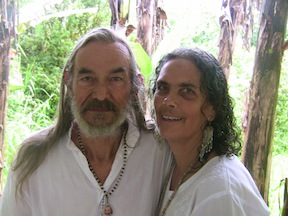 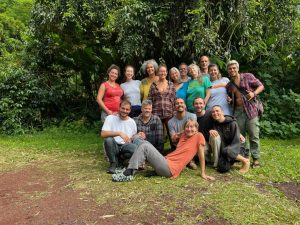 This week was Prasad’s birthday, and his memory was celebrated with a ceremony with songs from the tradition of Prem Baba.  We have 6 people here from Brazil and farm supporters, who enthusiastically added to the energy.

Prasad Dittman passed away October 29th, a few days before Halloween in 2021.  It was an amazing experience. He had been bedridden and in pain from his cancer for many weeks, and we took turns bringing him food and keeping him company in his last months.

At a small gathering at his house a few weeks before passing, we captured his loving last message in this short video.

He rallied his last strength and held a ceremony at his house the night before, and thanked everyone for coming to his “death party”. The next morning he called Ananda, his beloved friend and companion, and told her he felt it was time to go. 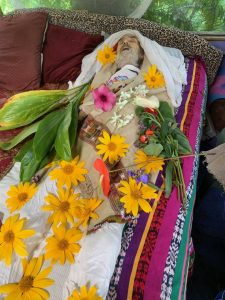 All of us gathered around him singing as he transitioned. It was perfect. The sun was shining. He was at peace. Prem Ananda was holding him in her arms.

After he passed to the other side, and we dressed him in his ceremonial clothes, we sang together for him.  See the short video here. 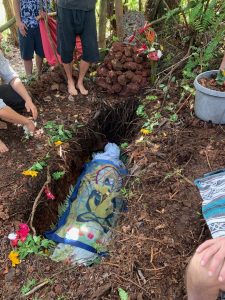 The next day many friends gathered to attend his burial ceremony.  We were able to bury him on our land, as we have already been approved as a burial ground when our other member Bernie passed away. We sang as we threw handfuls of dirt over the body wrapped in white cloth.   See the moving video of the burial here.

Prasad was a mystic, a true priest and an ayahuascaro, a rascal and a rebel.  He loved little children.  He could fix anything and he built himself an amazing, artistic octagonal house on a hill on our land.  He hated going to meetings, and could not understand why we all had to sit around and hash out every little detail of each decision every week. He always advocated for relaxation, presence, and love.  Many people loved him.

I hope my own passage is as blessed as that.

This entry was posted in La'akea Updates. Bookmark the permalink.